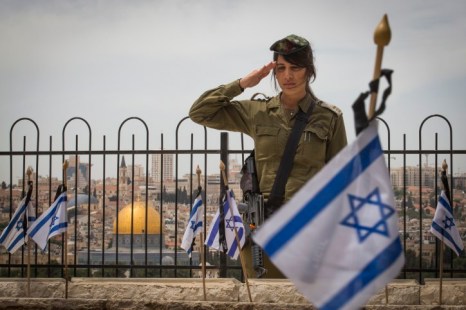 Just now, across Israel, the first of two air raid sirens sounded. 1 minute. Silence, noise, a metaphorical shofar, bowed heads. In another 15 hours, a 2 minute siren. The nation grinds to a halt and began to consider the men and women who sacrificed their lives for the State. Ruby Rivlin, President of the State is expressing the condolences of the nation to the “Mishpachot Ha-Shcolot” (the famlies of the 23,645 security personnel have died while serving since 1860.)

This year, Yom HaZikaron (Memorial Day) begins at sundown on Tuesday, April 17, 2018 followed the next day by Yom HaAtzmaut (Independence Day). It’s a long standing tradition, going back nearly to the founding of Israel, that Memorial Day immediately precedes Independence Day. It really is a day of “emotional whiplash.” A day of sadness and introspection followed immediately by a day of wild celebrations. In fact Yom HaZikaron ends around 8 PM every year. The transition is pretty wrenching. It’s almost as if “at 7:59 PM, we’re sad. and at 8:01 we’re deliriously happy.” Add to the fact that this year we will commemorate 70 years since the founding of the State of Israel in May, 1948 and you just know that this year’s celebrations will be epic!

I’ve always thought Israel does this the right way.

A guide I once had in Israel,described the period between Yom HaShoah (Holocaust Remembrance Day, one week earlier) in Israel, and Yom HaZikaron/Yom HaAtzmaut as the “Secular Zionist High Holidays.”

From Yom HaShoah where 6 million Jewish victims of the largest tragedy to befall the Jewish people through to Yom HaZikaron and Yom HaAztmaut, these 10+ days are quite meaningful. Since many Israelis are not religiously observant, the religious high holidays in the Fall (Rosh HaShanah and Yom Kippur) take on a very different meaning than this period of time in the Spring. The secular Zionist high holidays are nearly universally observed, except by small, fringe segments of the Orthodox communities and many, but not all, non-Jewish communities in Israel.

With the UN Vote for the partition of Palestine on November 29, 1947 , people around the world stated that the state of Israel was handed over on a “silver platter.” Chaim Weizman, who would become the first president of Israel, gave the following quote to HaAretz newspaper on December 15, 1947: “A nation is not handed over on a silver platter (אין מדינה ניתנת לעם על מגש של כסף).”

A poem, by Israel’s National Poet, Natan Alterman, appeared in Alterman’s column, “The Seventh Column” in the “Davar” newspaper of December 19, 1947.

Nearly 1% of Israel’s pre-war population died in the 1948 War of Independence. Think about that, for a second. Extrapolate that to the US and that’s nearly 3.3 Million people today!

My Personal Connection to Yom HaZikaron

I’ve been in Israel twice on this holiday.

The first time was during my year in Israel at HUC in 1987 and I was privileged to witness it from the courtyard of the Rene Cassin Municipal High School in Ramat Eshkol, Jerusalem.

We arrived at about 10:30 AM and the courtyard was filled with kids babbling about this teen drama or that piece of gossip. It was Spring, exams were approaching and I’m sure they had many things on their minds. The ceremony began and the mood flipped 180 degrees as the faculty started reading out the names of those alumni of the school who had sacrificed their lives defending the State. (Rene Cassin was known at the time as a school that had sent a very high proportion of its graduates into the IDF Officers’ Corps) Pre-State, 1948, 1956 (Great Grandparents, Grandparents); 1967, 1973 (Parents and Older siblings); 1980, 1986 (Friends and Classmates). Then at 11 AM, the Siren went off across the country and I was stunned but what I saw, what I felt and what I heard.

There’s no celebration of a nation’s independence without being mindful of those that sacrificed to make and keep the State. Everyone, in Israel, it seems, knows someone who has died in holy service to the nation or in an act of terror. It’s immediate, it’s personal, and its very sad.

In 2008, my most recent visit to Israel in honor of Israel’s 60th Birthday, I was in the Military Cemetery in Kiryat Shemona in the far north of the country, literally spitting distance from Lebanon and Syria. This town had been hammered during the Second Lebanon War in the summer of 2006 by rockets and artillery from Hezbollah in Lebanon. Many of their children gave their lives in that awful conflict. 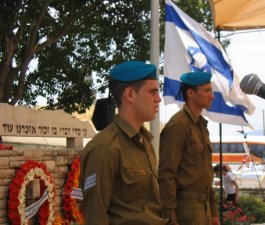 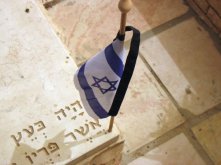 I was in the Military Cemetery that day at 10:30 AM and the mood was decidedly different. The first thing I noticed as I got off the bus was the sound of crying. A woman was prostrate on the ground weeping over what appeared to be the grave of a close relative. Talk about being hit between the eyes! Hundreds of people were milling about under a large white tent covering the graves of the fallen. Some brought flowers, some milled about quietly chatting and hugging. I noticed a bunch of old men with what appeared to be Russian military uniforms bedecked with old Soviet army medals. I guess a lot of Jews from the Former Soviet Union settled in Kiryat Shemona. I happened upon a family I did not know standing next to one of the graves, and I asked if it was OK if I joined them, and they graciously agreed. They told me the story of their son who died in the 1973 Yom Kippur War and in some way I felt that I was part of that family, if only in a small way.

The siren sounded at 11 AM and had a different quality, probably because the loudspeakers were aimed downtown and the Cemetery is a little but out in the hinterlands. This is what it sounded like.

After all that, let’s hope for happier times.

One side benefit of Yom HaZikaron is that the radio and television switch to somber, sad music. There’s also a lot of “oldies” on the radio. Take a listen.

Postscript: My tradition, if I cannot be in Israel, is to participate in some small way by listening to the 2-minute Siren over the Internet. So here it was, just a few minutes ago on Reshet Gimmel:

One thought on “My eyes are on Israel, today–Yom HaZikaron (Memorial Day)”