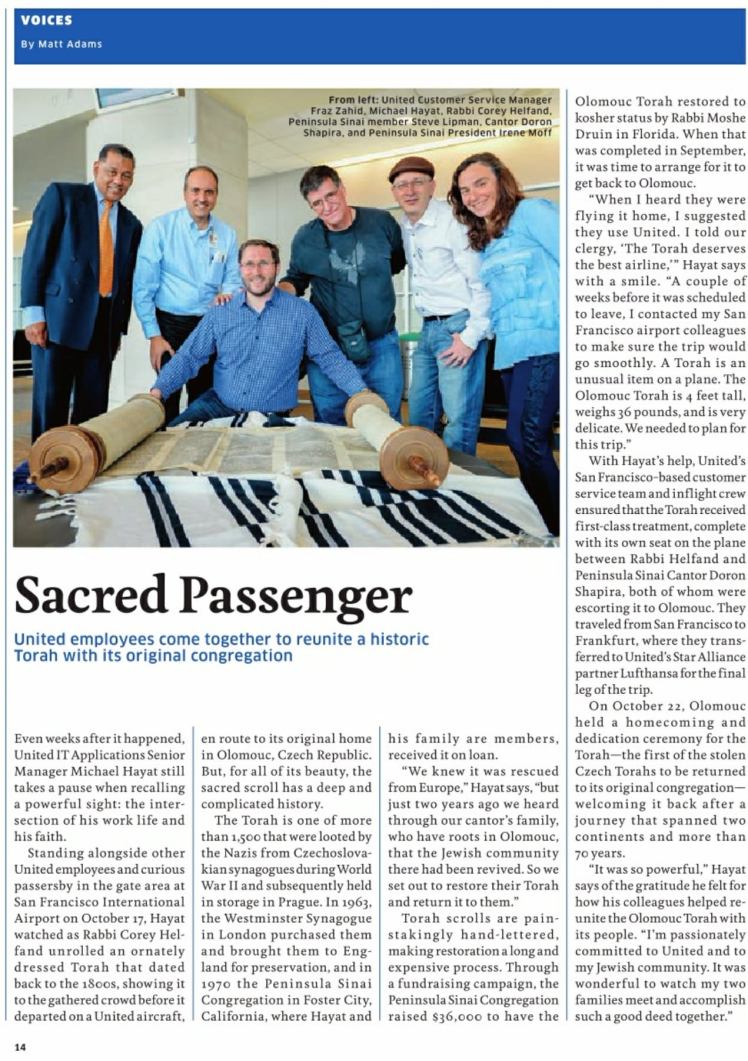 I could not let it pass that my picture appears on page 14 of the December 2017 issue of the United Airlines “Hemispheres” magazine. Thanks to my friend Michael Hayat for all the hard work getting us the red carpet treatment last month! If you happen to be flying “The Friendly Skies” this month, see if you can snag me a copy, will you? Ping me and I will get you my snail mail address! 🙂

Now on to the main topic of this blog post:

From the November edition of “Chajejnu” the Olomouc Jewish Community Magazine 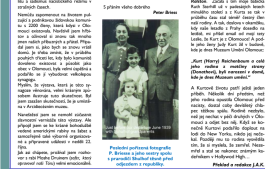 This was the best I could do with Google Translate from the Czech!

When we later were in Prague, Cantor Doron, Steve Lipman, Linda Oberstein and I, we went through a Jewish Neighborhood, we visited the local Synagogues, the Chevre Kadisha and Old Jewish cemetery. There was a monument To the Kli Yakar, Rabbi Shlomo Ephraim Luntschitz, who was a great scholar Torah of the sixteenth century. The Kli Yakar in his commentary on Parshat Lech Lecha expresses one interesting idea: the phrase לך לך — means go ,we have to go לעצמותך, for yourself, as part of exploring the Our עצם, our essence, the core of our identities. What makes Abraham’s journey so strange is that it wasn’t only about physical movement and territorial change. He left everything behind. It was a spiritual journey.

This moment “Lech” The physical identity was also about the reinforcing the hidden part of our souls. I perceive it as if our journey with the Torah was just about the physical Transport for for 6000 miles, the search of financial resources and telling a story, as well as the spiritual and emotional dimension.

As many of you have seen in the photos, traveling with Torah we felt like VIPs. In San Francisco, we were on escorted on board the aircraft 30 min. early, before the other passengers, we posed for photographers with On-board staff, while we sang “Etz Haim”, The Tree of Life is Torah.
The flight crew was touched to hear our story, including one flight attendant who has a Jewish friend and was with him at Yom Kippur. Also, our Pilot, a pious and spiritual woman who was so struck that she came out before the flight to see and touch the scroll.

Random bystanders at airports as in the United States and Frankfurt, included one woman in Frankfurt who was originally upset that our “golf clubs” (the Torah Scroll was transported in a “glof club bag”) as were sitting on the seat in the boarding area to Prague. After we told her the story of the scroll, she confided that Her family comes from Olomouc.

After we arrived in Prague, we spent the evening and the following morning touring the Jewish Quarter and then we then boarded the RegioJet Train to Olomouc. There we were warmly welcomed Roman Gronský, Jocelyn and Doron’s cousin, the man who was probably responsible for this whole action

After a quick stay in our hotel we went to the museum, where we saw a festive opening of the Exhibitions Olomouc Synagogue 1897-1939. Although we did not understand most of the ceremony because it was in Czech, we were clearly feeling warm and acknowledged that the Torah was coming home.

From Peter Briess (who was present as a young boy in Olomouc and remembers the Rabbi Oppenheim, reading from the scroll before the Synagogue was destroyed by the Nazis at the start of the occupation in March 1939. Rabbi Oppenheim was deported and killed in Auschwitz by the Nazis.)

… I can describe the return of the coil Torah to Olomouc as a very special event. I think it was The first time one of the Czech scrolls had been returned. How sad it is that the original splendor of the synagogue from which it originated was burned. This senseless destruction for me symbolizes indescribable brutality.

I can ‘t forget the life the enterprising Jewish community. With 2200 members who once lived here. I visited with our relatives and friends. I put myself back home. It should be noted that during the thirty years when the community existed (1897-1939) the municipality of Olomouc was very successful and built a spectacular Synagogue.

I think the exhibition that is this synagogue was beautiful and illustrates this fact. Was
I am struck by the fact that it is located at the Archdiocesan Museum. Unfortunately, I could not attend the festive opening of this exhibition. But I joined the beautiful synagogue services led by American rabbis at Shabbat and, of course, also excellent organised and prepared events on Sunday October 22nd.

I was learned with Rabbi Moshe Druin the Sofer who repaired our Torah) and was very emotional. I had the great joy that I was asked to do a Hakafah with the newly Kosher scroll by Petr Papuusek. I knew his grandfather Milos and I have the greatest admiration for Petr for what he has achieved in conducting this community for the last few years.

The souls of our ancestors would certainly be pleased. I would also like to express my pleasure from well prepared snacks and also the opportunity and great honor to meet Jeffrey Ohresteina, Roman Gronsky and other important guests.

Thank you all involved for the absolutely wonderful day for which I will never forget.

With the desire of all good…

(Photo caption: Last taken photo P. Briess and his sisters together with their grandparents Shul just before their departure from Czechoslovakia.)

Then there is a piece that I blogged about in the last issue of this blog on Kurt the Hairdresser.”

See November 10th: Kurt the Hairdresser: Another amazing layer to the Olomouc Story