The Olomouc Scroll (MST #740) is now on its way back home. Our synagogue, Peninsula Sinai Congregation in Foster City, has been honored to host this scroll and its companion scroll from the town of Ceske Budejovice in the Czech Republic for 47 years. Now, we’re closing this part of the circle and under the auspices of the Memorial Scrolls Trust, helping to return the the Olomouc Scroll to its ancestral home.

Where do you start to tell a story like this? At every step of the journey this morning from the minute we left the Rabbi’s house with the scroll, to the incredible gold-glove treatment and red carpet welcome United Airlines, the TSA and the cabin crew rolled out to us, the plane has not even left the ground and we’re already jazzed about the journey. 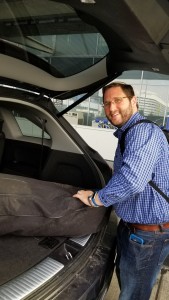 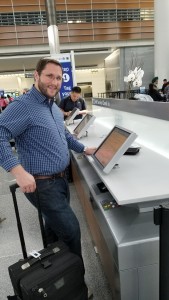 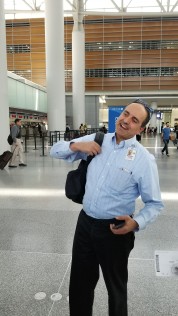 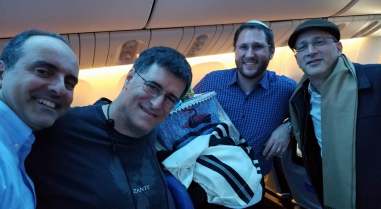 to the interview by ABC7 News legend Vic Lee of both Doron and the Rabbi.

The final cut that made it on the air was here:

The Torah even got its own boarding pass and seat! 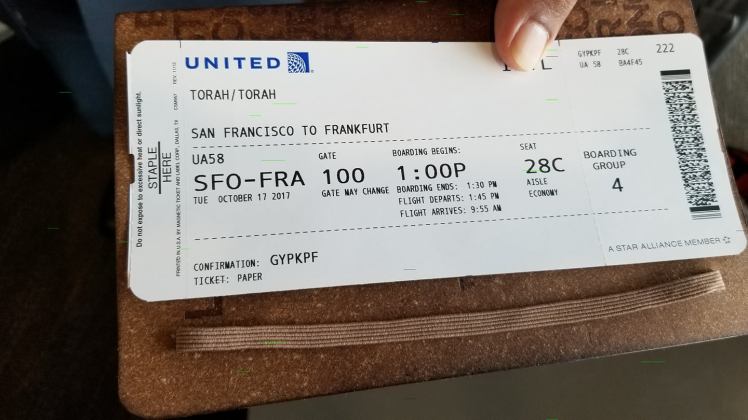 One of the highlights for me was an impromptu singing of “Etz Hayim” in the aisle of the plane as the cabin crew surrounded us.

One of the Pilots, Captain Patti, stopped by later and was full of so many questions and genuine concern for the story and the history of the scroll. She gave everyone a big hug before she went back to the cockpit to prepare our 777 for the flight to Frankfurt this morning.

Soon we were underway.

We even had time for some ROTFL moments on our flight

And some fans keeping track of our progress in-flight 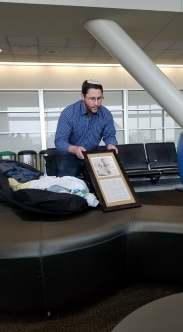 Our Facebook, Instagram and Twitter feeds (as well as this blog) has been blowing up as we fly over Canada. Thanks everyone for the likes and forwards! We are truly grateful for all the comments and likes

None of us got much sleep last night as our FB profiles were blowing up but there were some pretty sites below. Doron and I exchanged knowing glances when we passed over Limerick and thought of hundreds of Rabbi Marv’s B’nai Mitzvah limericks!

Captain Patti got us in right on time with a resounding THUD as the plane seemed to hit the runway at the very second that the plane emerged from the fog. “Willkommen in Frankfurt!”

After what seemed like a 10 mile hike with a 40 lb. Torah Scroll we settled in for a long wait for our connecting flight. We had a chance to grab a snack and also to chat with some of our fellow travelers about the story of the scroll. The response was universal amazement and I’d even say awe! 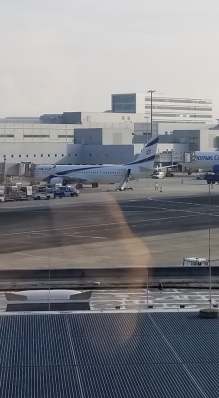 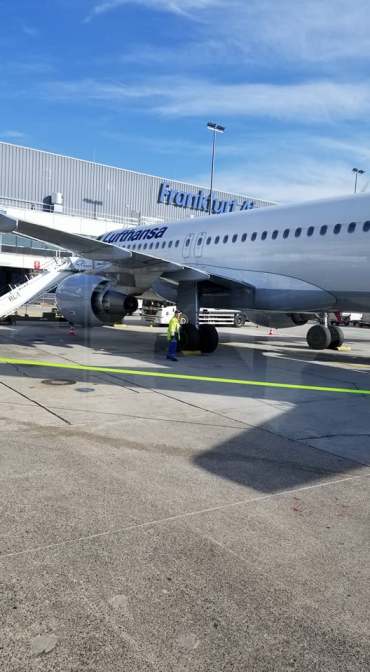 A one hour flight and 40 minutes of circling resulted in another THUD landing as we came in to Prague. We found our shuttle driver (Adam) who shared some interesting insights on Prague and also some pointed observations of our current administration. We’re now settled at the lovely Hotel Maximilian right in the heart of Josefov, the Old Prague Jewish Quarter. After a quick rest we think we will take a quick walk around the city before dinner. Linda should be arriving late tonight.

One thought on “And Awwwwway We Go! The Journey Begins”