One morning after the newly Kosher scroll was returned to the Aron Kodesh in Olomouc and I think we’re all still processing what this historic occasion meant. At least I know I am. I was honored to play some small part in this joyous simcha. Most of us have scattered to the four corners of the globe from this holy gathering but Sunday, October 22 was a day I don’t think I will ever forget. (Here’s one article in the Czech Press)

It seemed like there were hundreds of people in that “room where it happens” all waiting their turn to have a few precious moments with the Sofer Moshe Druin. They ranged from infants, to young children to other Czech community members to an 87 year-old Holocaust survivor and her mother to a distinguished gentleman who remembered Rabbi Oppenheim (Z”L), the last rabbi of the Olomouc Synagogue, to us visitors from California. This was clearly an amazing  occasion and you could realize it from the moment you walked in the room.

If you want to see the whole morning, it’s really fascinating to see some of the commentary and the goings on: 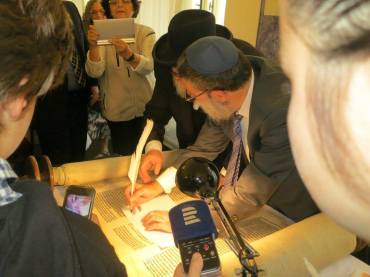 Then each of us got our turn. (Linda Oberstein and I got a “Yud” from the word “Ashira” from the Song of the Sea (Ex: 15:2) and Rabbi Druin talked about how the Yud makes a difference in us all from differentiating between men and women and also adding a holy spark of fire. I think we all could feel those sparks viscerally yesterday.

Lastly came Roman Gronsky’s turn. He was given the Kavod (honor) of completing the last word in this this Torah and his was “Ga’oh Ga’ah” which has to do with many things, among them “pride.”

It’s not just a matter of personal pride and it’s certainly not arrogance but for him (he was the one that drove this process forward over the last 2 years leading to its completion today) it exemplified the pride (and humility) felt by everyone in that room. This Torah CAME HOME. Be Proud! You could not help but feel the joy and honor we all felt.

This followed a wild, joyous Hakafah where we returned the Torah to the Ark. 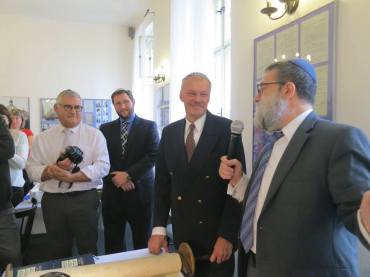 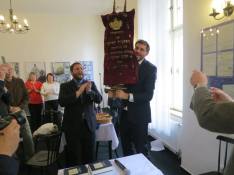 Maybe this signifies a transition from PSC to Olomouc best? From our vestments to those used by the community of Olomouc.

I also want to recognize something that Linda and I won’t ever forget.

Nearly lost in all the hubbub was an 87 year-old Holocaust Survivor Helga Smekalova from Olomouc, and her daughter, Radka Smith from Australia.

Helga had spent the entire war as a dental assistant to a Jewish dentist in Tereizin. Believe it or not, she said she actually loved the work and wanted to work in the field after the war but never realized that dream. She had such a radiant smile on her face it was hard not to get lost in her joy (and pride?) in that moment.

We spent over an hour with her listening to her stories in a quiet corner of the shul with her daughter acting as translator. She showed us a Magen David necklace she was wearing made from shrapnel of bombs and rockets sent over the border by terrorists in Gaza and turned into pieces of art. Roses into Rockets . Hows that for affirming life over death? 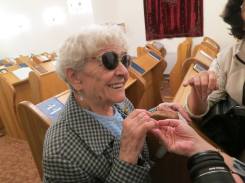 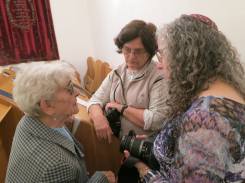