Saturday, September 30, 2017, Yom Kippur morning, I was sitting in my usual place in Shul, having just completed my Torah reading. The person honored with Hagbah (the lifting of the Torah) was sitting rather uncomfortably with some back spasms. Our Cantor motioned to me and asked if I could relieve him and sit with the Torah during the Rabbi’s sermon.

I knew that I was going to be taking a trip to Olomouc to return the Torah to its ancestral home in a few weeks. But this Torah was different. It was our second Czech scroll from Ceske Budejovice. As I sat with that scroll, I have to honestly admit I did not hear a word of what the Rabbi said. What I did hear were ghosts; the ghosts of the Jews of Ceske Budejovice talking to me. At that very moment on that holy day of the year, I could not help but imagine what the town and its people looked like. I honestly had no idea. So as I was sitting there, I hatched a plan to go and see for myself. I had no idea how or where I would do it but I was determined to bear witness and to represent my community in that Czech town.

All during this trip we’ve been talking about the Olomouc Scroll’s return to its ancestral home and rightfully so. Now it was time to switch focus, to our second Sefer Torah. The Ceske Scroll is the one on the left. The one on the right, is the Olomouc Scroll. At the time it had the blue band around the outside signifying that it was not yet Kosher. However both scrolls look especially beautiful in their High Holiday finery, don’t you think? 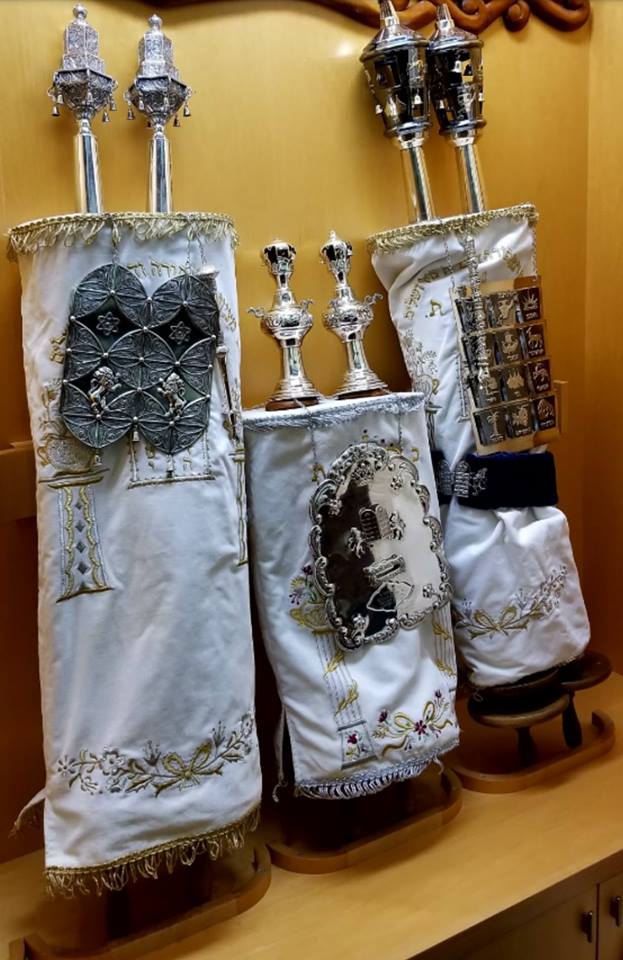 Ceske Budejovice is in the Sudethenland,

near the border with Austria and Germany, that infamous piece of real estate that Arthur Neville Chamberlain, British Conservative politician and prime minister of the United Kingdom from 1937 to 1940 came back from Munich in 1938, waving a white piece of paper and claiming to have made an agreement with Hitler for “peace in our time.” It was a pipe dream because no manner of appeasement would have stopped Hitler and his malign intentions. It’s actually a beautiful part of the Czech Republic and resembles the area around Lake Tahoe, I thought. It’s about a 2.5-hour drive south of Prague and the Fall Foliage was out in full force, as you can see. 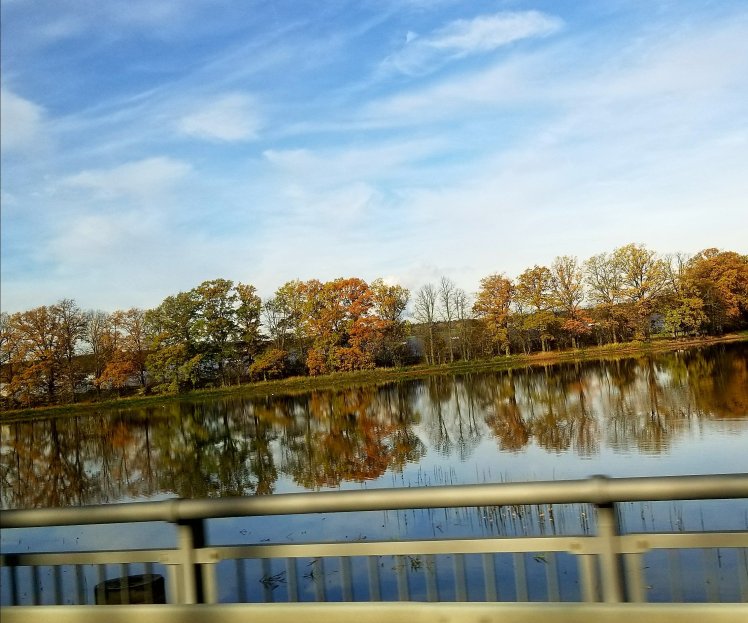 Jews had lived in the area since the 14th Century, a modern community established in 1848 and a beautiful Gothic synagogue, built in 1868.

1138 Jews lived in Ceske Budejovice at the start of World War Two. In June 1939 the offices of the congregation were closed down. Jewish shops were attacked on July 21, and on August 16, 1940, the Jews had to relinquish their homes. On April 18, 1942, 909 were deported to the death camps. Another 386 who had previously left the area were also deported during the war. The Germans blew up the synagogue on June 5, 1942.Today, there are practically no Jews left in the area.

Today Ceske Budejovice (Budvar in German) is the home of Czech Budweiser which is actually pretty good beer. It is not the same Budweiser that we drink here in the US. That Budweiser is named in large part due to a disputed marketing arrangement with the Czech government.

I was on my way with my companions down to a town called Ceske Krumlov which has a beautiful medieval castle and town not unlike Hearst Castle. I asked out guide if she could make a quick stop in Ceske Budejovice and she happily agreed. The live stream video below shows what our brief visit looked like:

My visit to Ceske Budejovice 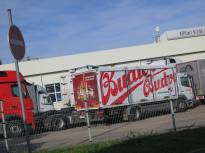 The visit was brief and so I decided to try and take as much of it in as I could so that I could report back to my friends from PSC what that area looks like. Since there is no community left, our Torah scroll is a silent witness to that community and we should honor it as we honor them.

May the memories of the Jews that perished in Ceske Budejovice be for a blessing and let’s think of them each time we use their Torah Scroll in our community in the future.

One small addition to this Blog Post from December 27, 2018:

I was put in touch with a gentleman named John Freund who grew up in Ceske Budejovice and this is what he wrote me:

“Hello Steve Lipman, what an amazing trip you had in the Czech Republic! Wonderful!

Yes, my family lived in Ceske Budejovice. CESKE means, Czech as there is another town in the Czech Republic, MORAVSKE (ie Moravian )Budejovice. Czech (cesky jazyk) means the Czech nation (cesky narod). The term Budejovice comes from Count Budejov (he ruled there five hundred years ago. The Czech language is the most western Slavic language.

My father was a pediatrician in town. His father (my grandfather, Alexander Freund) was a Magistrate, but he died before I was born. He is buried (as are my other grandparents) in the very large Prague Jewish Cemetery. On your next trip,you may wish to visit it.

You also visited Cesky Krumlov (an amazing little town) In the town (C.B.), there were about one thousand Jewish people, out of 50 thousand Gentiles. About 35 survived and I was the youngest (not yet 15). Despite the beautiful Synagogue, we were not very observant. Two Rabbis that I know about was a very beloved R. Thieberger, who moved to the USA) and my Rabbi Rudolf Ferda.

After Hitler occupied the land (March 15th 1939), we became more aware of Judaism and Israel, but I was only 12, when deported Terezin. The Synagogue was destroyed by the Nazis in June 1942.

Olomouc is a nice town,, I visited there only in 1989. After the war, in 1945 till 1948, I lived in Prague. It is a lovely city. My last visit there was in July 2017, when I accompanied the Canadian Children Choir to perform a Children Opera composed by a Czech Jew.

My friend told me that all the Czech Jews are related and so, yes, Susan Fisher is also related.

Later on that Spring, I had the distinct honor of meeting Mr. Freund and his wife and daughter in person in Sacramento and to speak about his remarkable story at PSC a few weeks later. John and his adolescent friends, perhaps out of boredom, perhaps to thumb their noses at the Nazis occupying their town, created a newsletter called “Klepy” which was essentially a gossip magazine that provided entertainment in those bleak days. Klepy was created in a single copy each edition and signed out from person to person as it was passed around the town. Original copies of Klepy can be found today in the Jewish Museum in Prague. 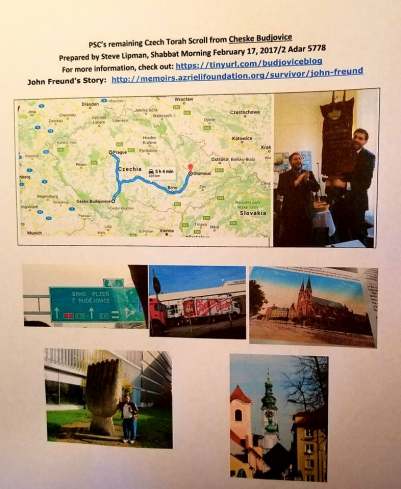 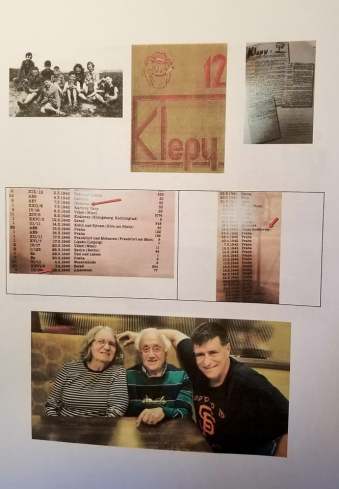 One thought on “The road to to Ceske Budejovice: Silent witnesses from our second Czech Sefer Torah”